Recently Carrie Rossenfeld wrote and article for Globest.com dealing with current changes in the retail environment that are affecting how architects and designers approach a project.  The title, The Changing Art of Designing Urban Retail Projects, is especially appropriate, not a little because retail store design is acknowledged as an art, but mostly because it offers a thought provoking comment on the current retail context near and dear to all of us working in the DC area; namely the shift from auto dominant to pedestrian dominant shopping.  Anyone who visits this site knows that this is not the first time I have engaged this topic, it is though, the first time I am inspired to organize the various environments in which I work into a single picture as follows:

Urban Retail – This requires little description.  It is Main street USA, whether in a big city or small.  It is pedestrian dependent and spans American History from Colonial Willamsburg to Old Town Alexandria.  It is an all inclusive spectrum of retail types and has become a model for current development.

Suburban Shopping Centers – Historically these followed suburban expansion after WWII supplying life’s necessities to newly mobile shoppers.  A typical shopping center consisted of a grocery store, a drug store, some specialty retail, and a couple of out-lots.  In time a big box was added, eventually becoming the force behind development until today we have acres of big box shopping centers.  The type has come to include a range of retail offerings from outlet malls to ethnic centers merging into a sprawl-scape along major roads and axes, all depending on the car for shoppers. 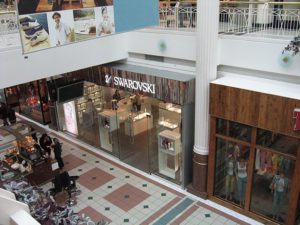 Suburban Malls –  These days almost relics, most of us have seen their rise and fall.  The ones that are doing well are, some say, surviving because the others have failed.  They are often in high income suburbs, connected with public transportation, draw international shoppers, boast multiple department stores, have expanded the types of anchor tenants they attract, and perhaps most important to this discussion, although dependent on the car for shoppers, the stores are designed according to a specialized pedestrian model.  Local examples:  Tysons Corner,  Pentagon City.

Mixed Use, also known as Emerging Urban, New Suburbanism, and the Mall Reborn (Don’t you love all the names?) – Of course, this is where the action is.  From my standpoint – designing for individual retailers – it is where pedestrian vs. non pedestrian visibility collapses into complexity.  David Kitchens, in the aforementioned article, drew 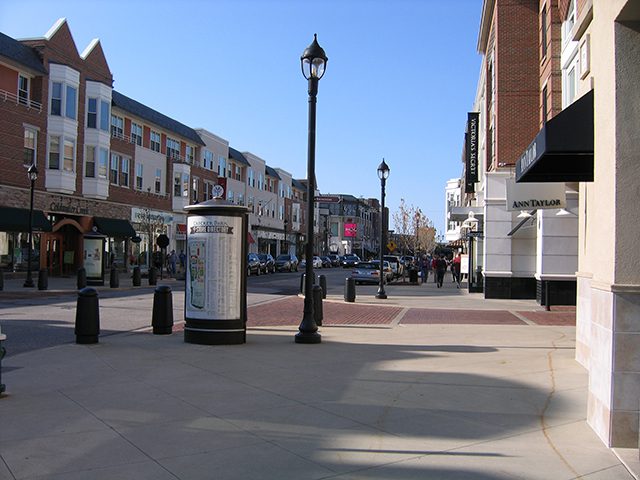 attention to the challenges involved in designing for, and integrating multiple uses into a development project, telling us that “…residential, office or hospitality…needs to be intertwined with or added to existing retail..”  The “repositioning” of Ballston Common and Landmark Mall were sited as local examples and in particular caught my attention because I have had inquiries from retail tenants being affected by the changes going on in these places.  Architects and designers working in the mixed use environment must have confidence that they, together with stakeholders in the greater design environment, will produce a whole that is greater than the sum of the parts.  They must be willing to release some control, to admit a bit of  “chaos.”  Kitchens put it well when he said it is about creating neighborhoods.  As an independent design firm working on retail projects in many different environments, I get this better than most.

Industrial/Commercial/Business Parks –  Defined by the National Institute of Building Science, 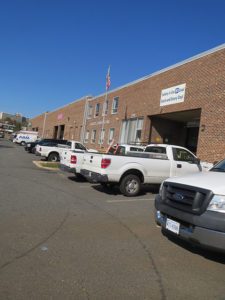 Light Industrial “… can include but is not limited to spaces for printing, commercial laundry, photographic film processing, vehicle repair garages, building maintenance shops, metal work, millwork,..cabinetry work…”  Think specialized showrooms, i.e., kitchen, lumber, restaurant supplies, catering, swimming pools, motor cycle accessories (Really, I had one inquire).  Think those moving from online sales toward brick n mortor.  Think those responding to “showrooming.”  Recent experience has lead me to believe that this is an overlooked retail environment and as such an opportunity.   From a store design standpoint, diametrically opposite to the complexity of mixed use, their retail presence is straight forward, direct and dependent on the car for shoppers.  It is a sector starting to see the value of investing in professionally designed retail showrooms.

Describing these retail environments has been a fun exercise but I didn’t do it just for fun?   I did it to make a point about designing a retail store to increase sales.  Few would argue that designing a retail store is involved with issues of shopper behavior, in particular how it can be influence by a store design. I have accumulated an ever multiplying list  of “Strategies for Designing Your Space.”  and do a presentation on the subject.  The article that started this survey, on the other hand, is about the other side of the issue, specifically how shopper behavior is influenced by the environment in which a store finds itself.  Of course, real estate people would sum this up as “location, location, location,” a subject that shows up in business plans and marketing activities all the time.  If, though, we understand the ideas set out in the article, the issue is more complex, suggesting that the current trend is for there to be little or nothing spontaneous or random about the macro environments in which retailers find themselves.  Also, I have often found that in the process of macro planning developers have let go of micro constraints typically found in places like leases and tenant handbooks.  This can be deceiving, leading a retailer to overestimate their control of a project.  In local terms this means that a space in a planned urban environment like the Mosaic Retail District is a lot different than a space in Georgetown or Old Town Alexandria or in a strip center or industrial complex as well.  I would urge any retailer thinking about their store design to consider responding to both the macro and micro point of view.  It is what has motivated me to summarize the several retail contexts listed in this post.