Architecture? Storefront Display? Graphic Design? Signage Design? All of the Above! 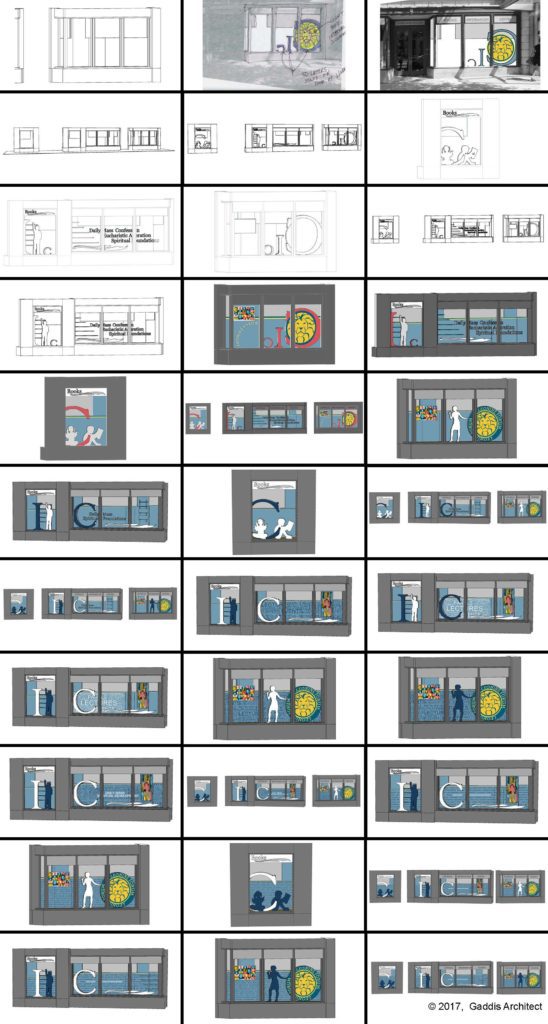 Anatomy of a Design Concept.  For more information and enlarged images contact us here.

Client’s Visions – Clients often call me because they see something suggestive in the portfolio on this site and want to create a similar look or physical presence for their own businesses. They may entertain visions of compelling displays that increase awareness and transform window shoppers into customers, or perhaps it is about creating and reinforcing an organization’s image, idea, point of view, or brand.

Design is a Process – Whatever the motivation, few would dispute that successful design is part and parcel of equally successful marketing campaigns evolving from resources and collaborations requiring lots of man hours.  Design is a process which is always, at least on some level, retail.

Not a Commodity – Yet the business environment, including the traditional “fee for service”  world in which most of us work, leads many to conclude that design is a commodity, something to be ordered from a price list.  It forces an architect to quantify a client’s vision for a project into a competitive proposal before any serious work is done towards understanding that vision.  It can be limiting and is often fraught with undefined expectations.  It is not a model that works very well in a collaborative environment.  Nevertheless, it always determines if and how a project moves forward.

Reconciliation – Overcoming this disparity has been a longtime goal of these “Insights.”  Consider this:  if I tell a client that the fee for architectural services on a project will be a fixed amount, he may want to negotiate some concession, etc., but in general he feels secure and accepts the fee.  If, on the other hand, I tell this client that the fee will not exceed a certain amount, he/she is thrown into a state of indecision and becomes unsure about how to proceed.  Ask your self why?  What makes a client back away, sometimes even leaving off an entire project?

Expressing a Vision – The answer is surprisingly simple.  Both models require and deliver basically the same thing, that being a new design in which the client has participated.  The difference is that, with the “not to exceed” fee for service model, the client is made aware that he is an active participant in the design process and as such has the ability, by effective communication, to affect not only the outcome, but also its final cost.  This places some responsibility for a successful project squarely in the lap of the one who launched it.  It also increases the chances of success.  After all, are not we, as architects and designers, facilitators, charged with expressing a clients vision?

Demonstrating the Process – The concept images shown above demonstrate a design process.  They become progressively more complete until the final design is reached in the last image.  Each separate image is the result of direct communication, correction and comments from the client, who was involved in every step, beginning with the most basic parti up to final design approval.