Designing With An Open Plenum Ceiling 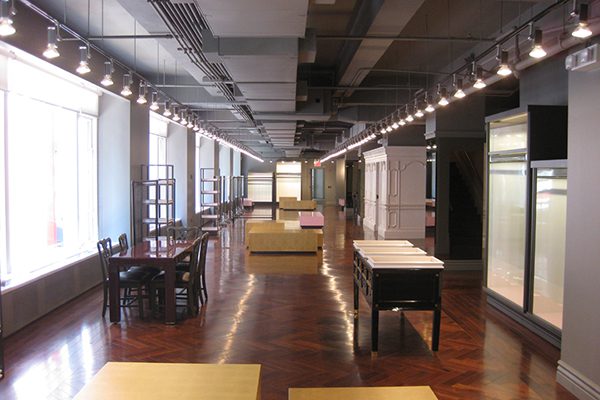 The ceiling in an existing showroom space has been removed, exposing HVAC, Structure, and Electrical Conduits. MEP systems have been configured in a organized way to improve the appearance of the ceiling. Building envelope has been painted a medium gray in preparation for merchandise display.

Open plenum ceilings are common design practice these days, seen more often than not in stores moving into newly built shopping environments.  In short we take them for granted as an acceptable design solution.  Recently, I have had a reason to take a critical look at this practice in terms of costs vs. benefits.

To begin with, it is necessary to  understand this in terms of a comparison.  Clearly a highly designed ceiling using several materials and with various heights will cost more and probably perform better than a typical open ceiling like the one in the photo.  This is not the question.  The real comparison and the one I am most often asked to make is, “how does it compare with a suspended ceiling?” 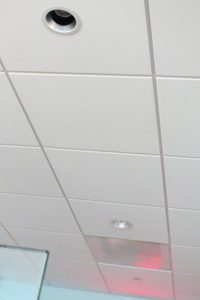 Let’s look at the cost issues first.  in 2008 the Ceilings & Interior Systems Construction Association did a study on this very issue that, from what I can tell, has become the “gold standard” for determining whether or not to choose an open ceiling.  The study concluded that although a suspended ceiling cost 4% – 14% more than an open concept ceiling, it creates a space that requires less power, not a little because 20% more light is reflected back into a space.  The total energy savings for a retail space turned out to range between 12.7%  and 17%.  Maintenance costs also turn out to be lower for a suspended ceiling because periodic duct, pipe and raceway cleaning, as well as plenum repainting is necessary with an open ceiling.  An additional side benefit, which I did not see specifically addressed in the publication about the study, is that the reduced heat load from the lighting allows for a down sized HVAC system, even to the extent that LEED credit can be earned.  The referenced study also looked at the amount of time it would typically take for a company to recover the additional outlay for the lay in ceiling and found that the pay back was under 2 years, less than the length of most retail leases.  From all this, I would conclude that, in a retail situation, a decision to choose a suspended ceiling over an open concept will most likely be a result of design considerations as the construction costs are about even. 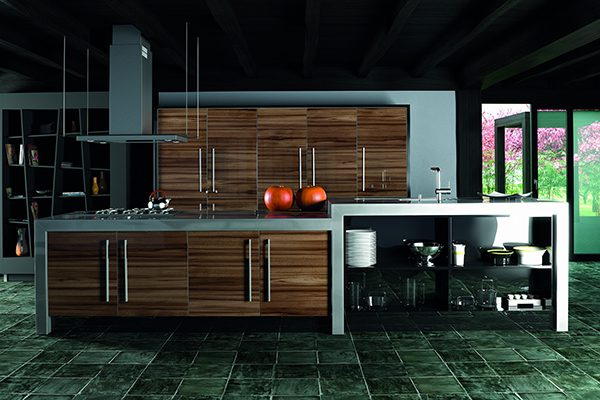 Painting an open plenum ceiling black creates a lot of drama and, if carefully planned, can draw highly focused attention to displays.

There are many design Issues to recommend an open ceiling, not the least being that they increase the ceiling height, thereby the amount of usable space in a store.  They are considered “on trend” and also impact how a space feels, an important consideration relating to the merchandise lines displayed in a store.  Small products often do better in a space with a ceiling which tends to focus a shoppers view down to a more personal level.  An open ceiling, on the other hand, conveys a feeling of space between large displays and vignettes.  They also work well for groups of merchandise with varied sizes, even creating the illusion of space in otherwise crowded environments as they allow a lot to take place in a shoppers line of site.  It is why these ceilings work well in restaurants by inserting variety into a dinners line of site.  By dropping a ceiling – or the illusion of a ceiling – over selected areas, retailers are able to create a personal space within a larger environment, thereby accomplishing the best of both worlds.

Though currently fashionable, open ceiling are not without challenges.  These environments require more design time and skill, especially in terms of lighting and color selection.  Lighting layouts installed in suspended ceiling grids offer the obvious advantage of ease of installation and flexibility.  It is why you sometimes see retailers install grids without the ceiling tiles, a practice that is rarely successful.    Lighting installed without the benefit of a grid, on the other hand, must be individually fixed to some type of structure, often by the use of pendants and other drop in devices and generally relying heavily on track systems.  The effort to avoid MEP systems and search for adequate attachment points can require more complex installations and limit flexibility.

Color is a subject in itself but worth some comments here.  Simply stated, most lay in ceilings are white – yes they come in colors which have their uses.  Open concept ceilings can be painted any color.  This can be a great asset or and equally great opportunity for a mistake.  Here are a few of my rules:  first, design the lighting and the ceiling together, as color affects that amount of light required; second, black creates drama and if used with carefully placed light colored or white contrasting elements can create really successful merchandise focused displays;  third, gray makes colors appear more vibrant so works really well to feature clothing and accent type merchandise;  forth, white or light options turn the ceiling into a sculptural element that can actually draw attention away from eye level merchandise and is often best if ducts and other MEP devices are going to be left natural; fifth, only use neutral colors.

Here is hoping that all this helps to inform your choice.  For more information the links above are worth checking out.