HVAC: Accounting for stuff only the birds can see! 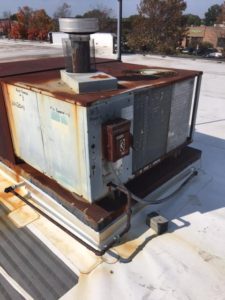 Necessary – What has this got to do with me?  I am building a chic new retail store.  I need to focus on the design, merchandise displays and retail image.  Who sees this?  I know – I know, the space must have functioning heat and air conditioning but, really, why do I need a structural engineer?  I want to put my budget were it is visible to my customers.

Most commercial HVAC units will last 15 to 20 years.  They probably cost over $10M each without any distribution and, in all but special circumstances, you cannot hope to have a functional commercial space without them.  They are as basic as the walls, roof, plumbing, lights, etc.  So when the HVAC company, landlord, or MEP engineer says it is time to replace you can be pretty sure they are correct.

Fundamental – Few would argue that it is completely fundamental for a tenant to understand who is responsible for the original installation, subsequent maintenance, repair and eventual replacement of the heating and air conditioning in a space.  Neglecting to do this would be like moving into a space that might or might not have walls, yet I am often surprised by retailers who are unclear about, even disinterested in, these issues.  Until something goes wrong that is. 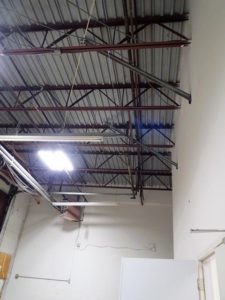 Bar joist hold up the roof and are common in retail environments.

Required – But I digress.  My intention is not to outline heating and air conditioning systems common to small commercial projects, which is nicely done here.   It is, rather, to explain why structural engineering is required for the installation of an HVAC unit.  Consider this;  all commercial HVAC systems have parts, many of which are large, heavy and sit on something, i.e., the roof.  The unit in the photo, for example, weighs upward of 1,200 pounds.  Now take a critical look at the structural framing system in the other photo, and ask yourself if it looks like it will be sufficient to hold up the concentrated load created by the installation of half a ton of equipment.  In this case the structure is actually holding up the unit shown, so the answer happens to be yes – barely.   I point this out because in many cases, especially in existing buildings without available structural drawings, common sense might lead one to ask if a new mechanical unit weighs the same as the one being replaced.  Be aware that where common sense fails, the building code does not.

Structural load calculations and drawings which have been certified by an authorized professional are required before building departments will issue a permit allowing heavy equipment to be installed in, or on, a new or existing building.  This, of course, includes mechanical, as well as other types of equipment.  I mention the later as an aside for all you restaurant owners out there.  Restaurant equipment is heavy and installing it in old buildings like those found in historic areas can create problems for unaware owners.  Also, in the case of replacement equipment, it is less involved but still necessary to evaluate a new unit even if it weighs less than the old one.  In the case under consideration, the replacement HVAC unit proved to be heavier than the existing, meaning it became necessary to provide structural reinforcement before the new unit could be installed. 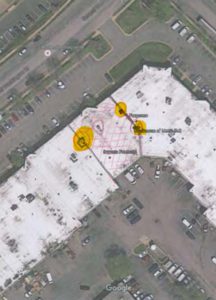 How – So what steps were required?  How did we arrive at this conclusion?  First we had a contractor go up onto the roof and take photos of the exiting equipment, including a close up view of the label.  This allowed the mechanical engineer to research the existing unit with the manufacturer who was able to provide a weight.  A new unit was then specified according to the new design for the space.  Efforts were made to avoid additional expense by matching  the new unit with the old and installing it in the same location.  Eventually it was determine that, although the location could be maintained, the replacement unit was going to be heavier than the old one.  Had it weighed the same or less, the mechanical engineer would have so noted it on the drawings and been done.

Since this was not the case, it became necessary for the structural engineer to completed the process.  He went to he site, analyzed the structural type, crawled up on a ladder, measured the bar joist, and checked the location of the existing equipment.  Upon returning to his office, he went through a series of calculations to see if the structure was sufficient to accommodate the new unit.  Since it was not he had to design and specify additional reinforcement adequate for the new equipment.  This information was delivered in the form of signed and sealed drawings and calculations, along with certified architectural and MEP documents, to the building department with the permit application.

Why – The point of this discussion is to show those contemplating a commercial building project what a single line in a lease assigning responsibility for the heating and air conditioning equipment can indicate.  In my experience all reputable landlords give full disclosure about the age and condition of the mechanical systems in their properties.  Many provide substantial construction allowances for unit replacement and other improvements.  Few, though, take into consideration the amount of engineering required in order to make the actual improvement.  Professional services, Architectural, Mechanical, Electrical, Plumbing and Structural, are expensive and should be accounted for in the budget for a building project.  I would suggest that forewarned is forearmed.